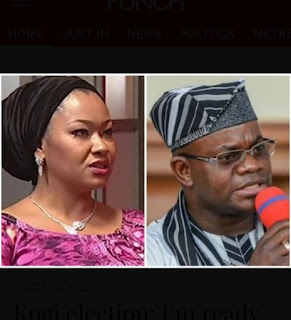 
Kogi State Governor, Yahaya Bello, on Friday, told the Federal High Court, Abuja, that he was ready to defend himself in the allegation of double registration laid against him by Social Democratic Party governorship candidate, Natasha Akpoti.
(Audio) Sinzu ft. Peruzzi - O'por
News Agency of Nigeria reports that Akpoti is the plaintiff, the All Progressives Congress and the Independent National Electoral Commission are first and second defendants respectively.
NAN reports that the suit, dated October 10 and marked FHC/ABJ/CS/1221/2019, filed by Chief Mike Ozekhome, SAN, on Akpoti’s behalf, sought the court’s determination on the eligibility of Governor Bello in the Saturday’s election, having alleged involvement in double registration as a voter.

(Audio) Pheelz ft Olamide x Naira Marley
Bello, reacting in a counter-affidavit filed by his lawyer, M.Y. Abdullahi, stressed that he did not engage in double registration as alleged by the plaintiff.
The affidavit was deposed to by Khaliat Bello, a lawyer in Abdullahi’s law firm.
It reads “That on the 23rd day of May, 2017, the alleged date of double registration, he was outside the shores of Nigeria and couldn’t have been anywhere in Nigeria to do voter registration.
“That as of fact, he travelled out of Nigeria on the 18th day of May, 2017 and never entered the country on May 28, 2017.
“The copies of his travel documents which show the immigration exit and entry stamps are attached jointly as ‘Exhibi A.’
“That he is ready and prepared to defend the allegation of double registration framed against him by the plaintiff.
“That he wants to join and defend the plaintiff’s suit no: FHC/ABJ/CS/1221/2019 as a defendant.
“That the proposed counter-affidavit and written address of the applicant are attached and marked ‘Exhibit B.’”
The governor argued that since the reliefs sought by Akpoti were against his nomination, qualification and candidacy, he urged the court to join him as 3rd defendant in the suit prior to the hearing of the originating processes.
Bello, who was represented at the court by Mike Enahoro, also sought an order of the court directing the plaintiff and the original defendants to serve him all the processes filed by them in the suit in the interest of justice.
credit: pulse ng

For ur Music, Video, comedy promotions